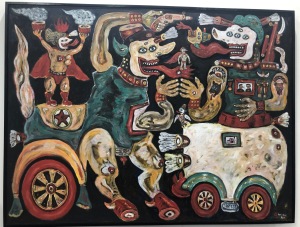 Negotiation Not to Use Weapon, 2019. The Columns Gallery

I like this Javanese-style painting where the artist features strange creatures which are puppets. Colourfully painted, the puppets are vibrant but mysterious at the same time. The title of this painting makes a strong and powerful contrast to the creatures that smile and interact with one another.

My favourite piece was a circular globe that was split into two halves. In the bottom of the first half there were all kinds of insects and bugs: a tarantula, centipede, a scorpion, and several other bugs. Somewhat alive. Others had already died.

When I first saw this piece I met a former Korean curator named Suzy, who had been staring at this piece for 15 minutes. She said that if this piece can be classified as art, then art isn’t humane. For me that is the very nature of art, to expose and explore our boundaries of discomfort.

When I went back again to this piece the name had already been removed. The curator said it was unsuitable for children during public preview. 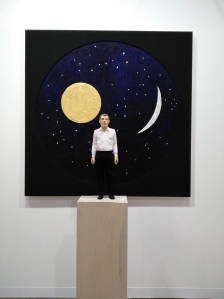 I was first drawn to this piece before I realised it was inseparable from the wood sculpture placed in front of it. The artist’s sculpture captures the basic characteristics of people — here is a typical man in a white shirt and black trousers — nothing out of the ordinary, bearing a grim face that reflects the mundaneness of daily life. The carvings are rough and imperfect, yet placed in front of a still, tranquil and clear night sky with the moon and stars. A poetic piece of art.

I love this piece the most because I became energised after reading this simple sentence. Among all the fancy artworks it stood out thanks to it’s simplicity. Some might question if these few words make it art but I say it challenges our deep-rooted impressions about art.

Violent, bold, defiant. These adjectives overwhelmed me the moment I walked by this painting. I discovered a free soul through the frenzied techniques, the rapid splattering and erasures. The graffiti-style character portrayed is like the surrealist cartoon Felix the Cat, which became famous during the Jazz Age. 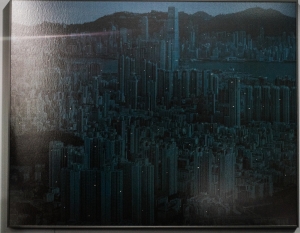 Inspired by the city landscape of Miami, Paris and Hong Kong, Aristotle Roufanis has been creating super-high-definition images of urban landscapes that are an intimate look into the lives of city-dwellers and their loneliness.

Named as Alone Together, the poetic series dedicated to the observation of the city. The piece Alone Together III shows us the imaginary night view of Hong Kong, including the Victoria Harbour, IFC and headquarters of BOC etc. “It is important for people to understand that although lonely, they are not alone. Individuality does not equal to alienation,” said Aristotle Roufanis. 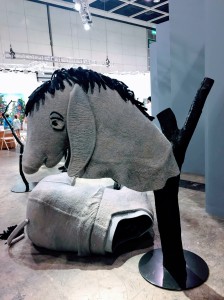 At Twilight takes us into a strange forest where Noh-style masks hang on charred tree branches, punctuated by a seemingly beheaded Eeyore, a character from the books by A.A. Milne. I thought the work had something to do with Hundred Acre Wood, but the accompanying mind map reveals that the installation was Starling reimagining the stage for W. B. Yeats’ “At the Hawk’s Well,” a play for two actors, three musicians, one dancer, eight masks and a donkey costume. Eeyore was still surreal but a playful inclusion. The masks were made in collaboration with Noh mask-maker Yasuo Miichi, whom Starling had worked with in a previous project. The mind map is a collage that reveals the intricate relationships and connections in the art world. For example, one of the features of the mask was a Constantin Brancusi-style rendering of Nancy Cunard, the heiress in whose salon Yeats’ play was staged in 1916. The barren trees decry the loss of ritual in traditional theatre and are meant to represent Ashdown Forest where Yeats and Ezra Pound took refuge in during World War I. It’s interesting to see Starling make these connections and give the viewer a depth of understanding that’s otherwise not possible.

As one of the major contributors that founded the Gutai Art Group which kickstarted Japanese contemporary art — Atsuko Tanaka (Japanese, 1932-2005) was renowned for her experimental performances of pictorial gestures. 91F is one of the many pieces in which Tanaka communicates her abstract visual language with the audience.

This piece excites me because it focuses on the media used to communicate artistic ideas, which are often neglected and ignored when viewing a piece of work. Tock throws the spotlight on the ordinary materials which transform a blank surface into valuable art.