Slashing canvasses and banging nails into a bench are just some of the ways for Hunan-born artist Li Yonggeng to express the strength of his emotions with his art.

Explaining the intensity of the violence of his work, Li, 42, says he does it to “blur the boundary between experience and creation”.

In a series known as “Prescription”, the self-taught artist hacked canvasses and then stitched them up again, transforming them into art pieces. Li then expanded the scope of his destruction by posting canvasses to friends and asking them to cut them up and mail them back.

While vandalising canvasses may be nothing new, the fact that Li was suffering from depression could shed some light on his activities over the last decade.  Perhaps, in his case, repairing damaged canvas was soothing. As he explains in the artist’s statement, “sewing helped calm my mood during the time when I suffered from depression”. 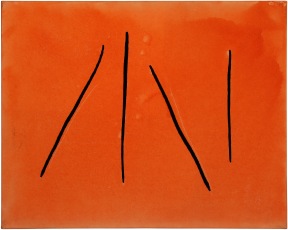 When Li divorced his wife, he banged nails all around a bench and connected them with thread. Emotional upheaval seems to be at the heart of his work. A closer look would reveal the rusty nails are closely packed, creating a strong tension. Even though the bench is not large, it nonetheless took Li three months to complete. The viewer can only guess at the magnitude of the artist’s underlying raw emotion.

The bench is one example of how Li made use of domestic items in the “Do” series. As Li himself says this kind of work allows him to express himself in the medium of his home surroundings. He also symbolically sends an unusually sincere invitation to his audience to explore his intimate pain.

It is fortunate for Li to have found art as a way to heal his depression and express his emotion. Li also invites visitors to the exhibition to indulge in a sport of canvas-slashing too. Feeling frustrated? Go visit the gallery and see if it helps.

A Path to Life runs until April 19 at Galerie du Monde, Central.