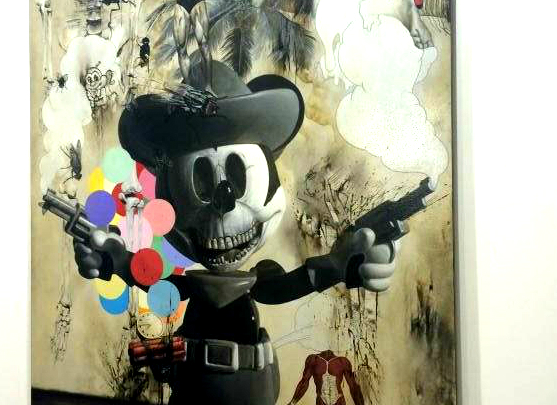 Art Basel and Art Central present art in abundance. Keeping track of more than 3000 artworks can be challenging though. CJC Fellows name their favourite art pieces.

Tang Dixin’s Trash Laughter invokes a sense of fright with the grin in the figure’s face contrasting with the dull, filthy and deprived greyness. However, it will have a very different impact with its audience here in Hong Kong than at elsewhere. With a familiarity with the Hong Kong political symbols, viewers will have no difficulty recognising the painting’s eerie resemblance to an infamous humorous Internet meme of local politician-turned-top official Ray Lau Kwong-wah. Lau, now the Undersecretary of the Constitutional and Mainland Affairs Bureau, had a signature Hong Kong rubbish bin blocking his poster, revealing just part of his face, as if he were hiding inside the bin. This unintended coincidence with a Hong Kong political joke makes it very intriguing to see how a Hong Kong audience reacts to this piece of art. Daniel Suen

Named after the ancient philosopher Zhuangzi’s fable, Dreaming of Butterflies touches on the symbiosis between humans and nature. A naked girl huddled on the ground like an infant gives a sense of pureness and at the same time the loneliness of life. The girl’s hair grows like a seed, the top of which is surrounded by butterflies. The enchanting scene blurs the difference between human beings and plants and insects, inspiring people to think about the essence of life. Looking at the sculpture, people can smell a sense of tranquility and are ready to be purified. Chen Guang

My favourite piece from Art Basel is Wilson Shieh’s Set of 16 Drawings, specifically the drawings about Feng Zikai, Pieter Bruegel and Haruki Murakami. With the use of gentle and light ‘brushstrokes’ of colour pencil and monochrome pastel colour, in addition to the collage of child-like figures in his signature gongbi style, I felt an innocent intimacy, calm and softness. The images and handwritten texts the artist shares reinforce each other. I like the comics of Feng Zikai very much and his concept that everything has a humanistic side. The Pieter Bruegel’s series of four seasons are my all-time favourites as his meticulous detail touches my heart a lot. Moreover, On seeing the 100% Perfect Girl by Haruki Murakami brings lots of interesting questions to me. Thus, when I read how Wilson Shieh was connected to these figures, at a particular point, I was connected as well. Madeline Lai

Japanese artist Shintaro Miyake is drawing Hong Kong from his perspective on the city: the intensive building, the taxi, the dim sum, the roasted duck, and the people. He uses just one black crayon on a 10sq/m whiteboard to describe his first visit to Hong Kong. This is an on-going piece started when the fair started, which will be finish by the end of Art Basel. If you drop by day by day, you feel like you are taking an excursion together with the artist. Claire Li Yingxue

Some may argue taxidermy is better left to natural science museums, but Myeongbeom Kim’s Untitled, exhibited by Gallery IHN, draws a sizeable crowd at Art Basel. Mounted on a swell of dried leaves, the deer taxidermy sprouts a colossal pair of antlers made out of tree branches held in place by overhanging wires. The work expresses the grandiose in nature, as well as questions the boundaries of life and death. All of its major constituents are specimens of nature, wilted and dead, but Kim reconstructs these materials to present a fantastical image that looks as though it were alive. Jacqueline Leung

The artwork ‘Intifada’, an Arabic term for ‘uprising’, is crafted by British artist Siobhán Hapaska. Three uprooted olive trees are suspended horizontally within open aluminum cube structures, coupled to fiercely vibrating motors. The scattered leaves beneath represent their silent screams. Trapped and chained to the state of constant shaking, the floating forest withstands the relentless violence with strenuous endurance. Those corpses tremble with an aching soul, much like human beings confront the brutal lashes of life. Shake it off. Live with the immutable in an undefeated defiance of distress. Du Yijie

I often cannot help myself from sinking into dark paintings. In Invitation to the Feast, corpse images and cartoon characters are the two major elements, combined in a violent and dark way. The most significant figure, Mickey Mouse, is actually a skeleton, holding a gun in each hand, with an evil and arrogant laugh. The sense of “being challenged” is presented in every trivial “ignorant” characters in this paintings. Ventura depicts a world full of fake “beauty”, which is being brutally destroyed by a fatal power that represents a more visible reality. Under the process of decoding, a real “feast” full of sarcasm and fraudulence is disclosing from deep inside. Violet Sun